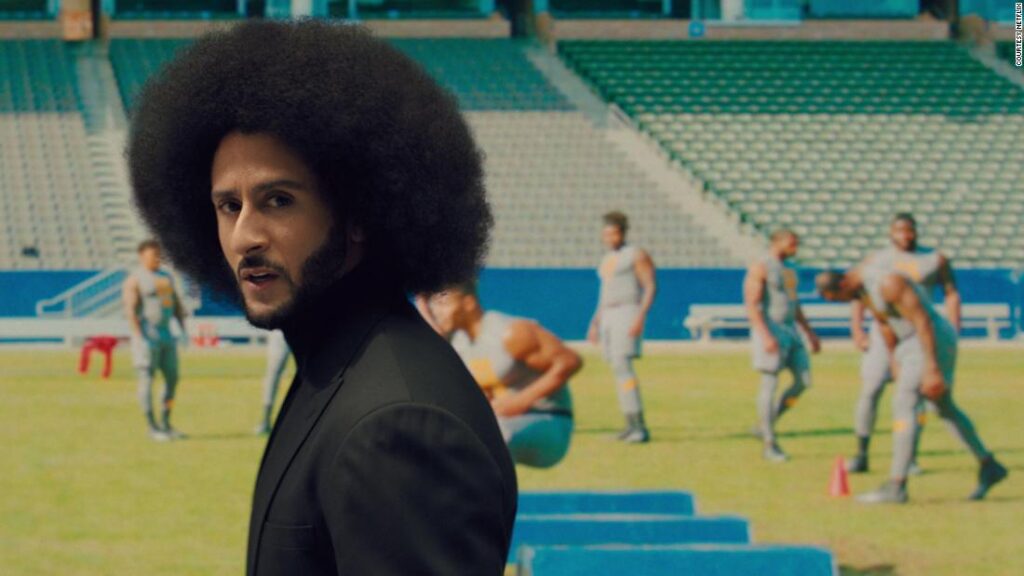 As it happens, the Netflix show premieres the same day as another series connected to a pro athlete, NBA star Kevin Durant, who is among the producers of “Swagger,” an Apple TV+ series that looks at the often-unsavory, high-pressured world of youth basketball.
“Colin” is the higher-profile project, with Kaepernick having been left off an NFL roster since 2017, after taking a principled position over kneeling during the national anthem to protest racial injustice. Outspoken in the intervening period, the quarterback has teamed here with filmmaker Ava DuVernay, who directed the premiere of the six-episode series as well as the sequences in which Kaepernick speaks directly to the camera, illustrating his observations not only about his life but US history, race and inequality more broadly.
Thanks to that hybrid format, “Colin in Black & White” feels stilted as Kaepernick stares intently at the camera discussing microaggressions, how Black people’s advancement and acceptance invariably relies on “a White man’s stamp of approval,” and occasionally watching reenacted scenes from his life.

A more straightforward approach likely would have played better, and that structural fumble somewhat dilutes the dramatic sequences, which feature Kaepernick during his formative high-school years (well played by Jaden Michael). Mary-Louise Parker and Nick Offerman portray his adoptive parents, who at one point call him “a thug” because they disapprove of his hair, and often seem oblivious to indignities he faced from figures like police, hotel personnel and umpires, having excelled in baseball before settling on football as his chosen career path.

Growing up with them, Kaepernick notes, “I assumed their privilege was mine. I was in for a rude awakening.”

At its core, the series serves as a venue to witness the racism Kaepernick experienced, conveyed in subtle and not-so-subtle ways, including the sidelong glances directed at a young Black man growing up in a predominantly White world. To those who only see professional athletes through the prism of wealth and fame, it’s a reminder that they weren’t always in that position.

“Swagger” covers similar territory, focusing on the pressure placed on teenagers in the pursuit to become NBA draft picks, beginning at a ridiculously young age.

Here, the focus is on Jace (Isaiah Hill), a hugely talented 14-year-old who has “NBA” etched on his wall, a reminder of his ultimate goal as he participates in youth leagues and seeks to improve his game.

His mother (Shinelle Azoroh) takes an active role in that, steering Jace to a youth coach (O’Shea Jackson Jr.) who was once a prized prospect himself, only to have lost that opportunity (a scenario explored via flashbacks) and now coaching as a way to stay close to basketball.

Anyone familiar with the system — from the shady role of agents to shoe companies trying to align themselves with future pros — won’t find a whole lot new here, and almost every episode seems to build toward a basketball game, complete with naysayers offering real-time commentary on social media.

Durant joins other NBA stars — including LeBron James and Stephen Curry — by moonlighting in the production business, and “Swagger” has its moments. Yet for the most part, it plays more like a second-tier series than a blue-chip one.

Similarly, it’s possible to come away from “Colin in Black & White” with greater appreciation of Kaepernick’s personal journey and what motivated him to take a stand at considerable personal cost, and still feel like they’ve used the wrong creative playbook to make this work as a TV show.